I've gotten a lot of questions since I started telling people about the pregnancy.  I would say that most people are probably just curious, though I would also say that sometimes the questions are at least a little rude.  (Even though I'm 100% sure they aren't meant that way.)

Since this is my space to share things on my own terms, I've decided to cover everything you'd want to know in this post.  I've been asked all of these questions at one point or another, so I assume they're the things people most want to know about.  And, if you're feeling nosy, you're welcome to ask me anything else in the comments.  I'll most likely answer the question. 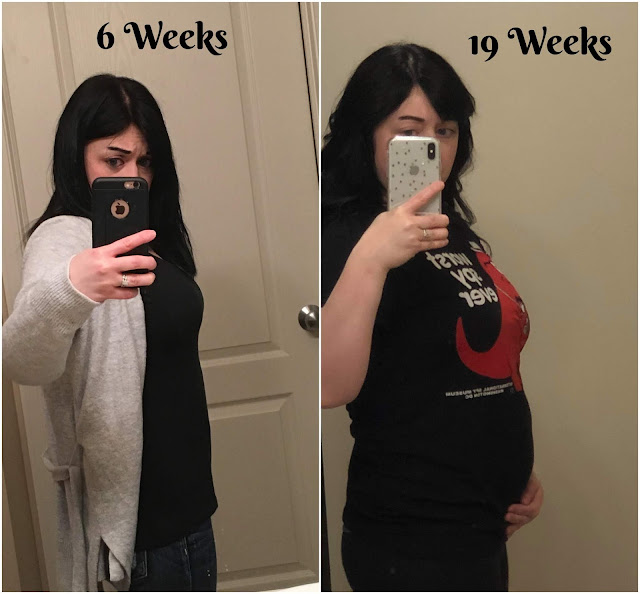 Were you trying to get pregnant?

Yes.  This was 100% planned, though it did happen significantly earlier than we thought it would.

When did you start trying?

I went off birth control and all medication that could potentially harm a fetus (I'd already spoken with my doctor about this) in late November.  We used backup birth control until we decided to start actively trying in January.

How far along are you?

I'm 20 weeks this week, so I'm right at the halfway point.

When is your due date?

Did you do anything special to prepare for pregnancy?

I started taking prenatal vitamins when I stopped birth control.  I stopped drinking alcohol on January 2nd.  I cut way back on caffeine and stopped eating anything I knew I couldn't eat while pregnant (like sushi and soft cheeses) in early January as well.  I was trying to lose a little weight beforehand, but I didn't really have much success there.  (I felt like I gained a lot between my mom's visit in October, vacation in November, and the holidays.  In reality it wasn't that much, but I definitely wasn't at my ideal weight prior to getting pregnant.)  Eric and I also tried to eat plenty of fertility boosting foods (like kale and spinach), and I used a fertility app to track my cycle.

Do you know the sex of the baby?

No, and I'm not going to find out.  I could find out at my appointment next week during the big anatomy scan, but I want it to be a surprise.

Do you have names picked out?

Eric and I have had names picked out for years (even while I was still on the fence about having kids).  I'm not super secretive with them, but I'd prefer to share the name once the baby is born and we know if it's a boy or girl.

How much weight have you gained?

Honestly ... Not much.  I've gained a total of 8 lbs.  I really haven't been as active as I'd like (I blame the exhaustion I mentioned yesterday), but I've been eating pretty much the same portion sizes as I always have.  I eat more if I'm really hungry and less if I'm not, though I do tend to snack a little more than I normally would.  I've also still been wearing my regular clothes, though I have to use a band for my pants since I can no longer button them.

Have you had any cravings?

I started off craving french fries and meatball subs, and have since moved on to spicy food in general, broccoli cheddar soup, Indian food (I literally ate this four times in one week about a month ago!), brownies, pickles, and, most recently, apples.  I don't go overboard with the cravings, but we'll usually make a point to eat at least a couple of the things I really want each week.

Have you had any aversions?

So far I've only had to stop eating one thing, but it's a pretty big thing to remove from a diet: chicken.  Even the thought of it disgusts me, and I haven't eaten it in at least two months or more.

Have you had morning sickness?

Not really.  I got really nauseated several times during the first trimester, but I never actually threw up.  I tried to curb the sickness by eating salty foods earlier in the day (popcorn, chips, or crackers), and that worked for me.

Have you felt the baby move?

Yes.  I wasn't sure about it at first, but there have been a few times that it was unmistakable.

Are you going to keep working?

Yes.  I know it will probably be hard to go back to work after my maternity leave, but I'm not really interested in being a stay-at-home mom.  While part of me thinks it would be great to stay home and spend time with my kid, I also know myself well enough to know I would lose my mind if I wasn't regularly interacting with other adults and focusing on things other than the baby and housework.  (And, let's be honest ... I would make a shitty housewife.  I despise cleaning and laundry and chores in general, and that's part of the package if you stay home while your spouse works.  I mean, the same expectations would be there if I were working and Eric stayed home.)

Have you found a daycare?

Yes.  We're enrolled at one place and on the waiting list at another that we liked slightly more.  I felt like we started the daycare search pretty early, but we actually didn't -- a lot of families start looking as soon as they find out they're pregnant.  Waiting lists are common (and sometimes very long), so we were very thankful that one of our favorites happened to have an opening around the time we would need it next year.

Do you feel prepared?

Not at all.  We've bought a few things, but we have a long way to go.  We're also in the process of figuring out when to buy new cars and a house ... So that's kind of stressful.  We were planning for both of those things anyway, but we're definitely feeling more of a push now that I'm pregnant.

I think that probably covers most things people would want to know (and probably some things they didn't).  I swear my next post will not be all about this stuff -- it just feels good to finally be able to write about it!
on 7/03/2018
Email ThisBlogThis!Share to TwitterShare to FacebookShare to Pinterest
Labels: about me, general, pregnancy