It's been pretty obvious that I haven't been spending a lot of time on my blog lately (or, to be completely honest, reading/commenting on other blogs).  The main reason is definitely a good one (in my opinion anyway!), but I'm slowly trying to ease my way back into blogging and all of the things that go along with it.

I seriously considered not linking up with Steph and Jana again this month because I was completely unprepared to write this post.  (Not to mention the fact that I never got around to responding to comments from my link-up post in May.  Ugh.)  Last month I didn't join the link-up because I knew I didn't really have the time/energy for it, but I should have still been keeping up with taking notes on the books I was reading since I knew I'd want to share my thoughts in one big post.

Well ... I didn't do that.  I'm relying solely on my memory for these reviews and I plan to keep them pretty short, so hopefully they'll capture the main reasons I liked/disliked each book. 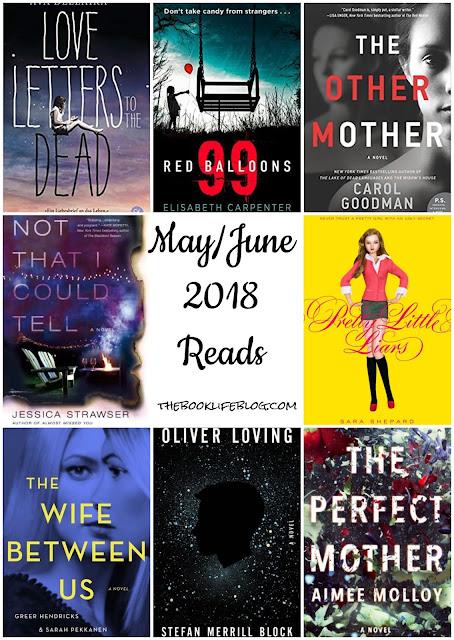 2018 has just really not been my year for reading books that I fall in love with.  I've read some pretty enjoyable books in the last couple of months, but none were what I'd consider five star worthy.

Love Letters to the Dead by Ava Dellaira
Completed: 05/01/18
My Rating: ****
Challenge Category: A book about death or grief for the 2018 PopSugar Reading Challenge

I actually should have included this book with my April Reads, but I forgot.  At least I remembered to talk about it now!

This is a YA book, and it's obvious that that's the intended audience.  It's not as "young" as some YA books I've read, and it definitely touches on some pretty heavy topics -- but I do think I would have enjoyed it more if the writing had felt a little more mature.  (And maybe also if the main character wasn't constantly obsessing about the oh-so-beautiful-and-mysterious boy she likes.  I felt like that kind of took away from the more important parts of the story.)

Despite its flaws, Love Letters to the Dead was an overall quick and enjoyable read.  I initially thought it would be a three star book, but it actually moved me to tears at one point near the end.  If a book can stir up that much emotion, I think it's worthy of at least four stars.

99 Red Balloons by Elisabeth Carpenter
Completed: 05/23/18
My Rating: ****
Challenge Category: A book with song lyrics in the title for the 2018 PopSugar Reading Challenge

I wasn't really expecting much from this book.  It was one of those books I chose because it sounded like it could be potentially interesting and it satisfied a category in one of the reading challenges I'm participating in.  Luckily, I found myself really captivated by the story and wound up really enjoying the book.

While some parts lagged a bit and certain aspects of the story seemed a little too far-fetched, I liked that 99 Red Balloons brought some fresh ideas and twists to the "child gone missing" plot.  I can usually guess a lot of twists, but I wasn't as sure about this one ... It definitely kept me wanting to know more!

I should also note that this was yet another book that made me cry ... And not for any of the "expected" reasons with a book like this.  I won't share what it was (I don't like spoilers), but I will say that I was surprised that a subplot in a thriller could move me so deeply.

By the end of this book, I kind of wanted to give it a lower rating.  It wasn't that the ending was awful or anything ... It was just that the book kept getting more and more batshit crazy.  Don't get me wrong -- batshit crazy can be entertaining.  (And, for the most part, this was.)  I think I just got a little frustrated because it eventually felt so over-the-top and unrealistic.

That being said, I mostly enjoyed this crazy ride.  I was able to figure some things out, but there were a few twists that really surprised me.  (Which is always a good thing!)  And even though I thought about giving it a lower rating, I think The Other Mother probably deserved the four star rating it received -- it kept me entertained, and I thought about it quite a bit even when I wasn't reading it.

As with The Other Mother, I was also really on the fence about my rating for Not That I Could Tell.  I liked the book quite a bit, but it was difficult for me to really pinpoint what it was that made it so enjoyable.  It could have been a case of "right book right time," though I remember really liking the characters and wanting to know how everything played out for each of them.

This book reminded me of something Liane Moriarty might write (and that's not a bad thing), so I think it could appeal to fans of her books.

I specifically chose to read this book because I wanted something quick and easy that I didn't really have to think about.  Pretty Little Liars definitely fit the bill.

The TV show is one of my guilty pleasures, but I didn't enjoy the original book as much.  I'll probably read some of the other books in the series just to see how they differ from the show, but reading the first book was essentially like rewatching the first episode -- several parts were even word for word identical.  I've actually rewatched the series a few times (yes, I like it that much), but I was hoping for something different from the book.  That's the reason I sometimes like to read a book even after seeing the movie/TV show -- it can often give some additional insight into certain events in the story to make things more clear.  That really wasn't the case here.

And, even though this is kind of dumb, I was a little annoyed that some of the characters looked and/or acted so differently from the way they were portrayed on the show.  I know that things change a lot when books are adapted to movies/TV shows, but I couldn't get over the fact that book Emily had a bunch of siblings (and red hair!), book Hanna was really smart while book Mona was kind of ditzy (and blonde!), or even that the girls were so much younger when Alison disappeared.  Like I said, these are all dumb things ... But they distracted me from the story and made it less enjoyable.  (Also distracting: when the author mentioned Hanna's Adam's apple.  What the fuck?)

The Wife Between Us by Greer Hendricks and Sarah Pekkanen
Completed: 05/16/18
My Rating: ***
Challenge Category: A book written by two authors for the 2018 PopSugar Reading Challenge

I guessed most of the twists, but that wasn't necessarily what turned this into a "good, not great" book.  I think I just never really got into the story the way I thought I would.  Add to that the fact that I can't even come up with much to say about the book (good or bad), and that pretty much sums up why I'd call this an "average thriller."

I wanted to like this book much more than I actually did.  While the writing was in no way what I would consider "bad," there was a lot of repetition -- I often felt like I was reading the same thing over and over without receiving any additional information.  I can appreciate a slower novel that unravels the truth of the story a little at a time, but this was brutally slow.  I found myself wondering if the author would ever get to the "big reveal."

I did appreciate the timeliness of many of the topics that formed the backbone of the story, though.  Unfortunately, school shootings, racial tension, and immigration issues are at the forefront of our news forecasts, and Oliver Loving incorporated them into the story in a very natural, believable way.

I think it's possible I may have just chosen to read this book at the wrong time.  Maybe I would have appreciated it more if I'd read it at another time ... Maybe not.  Regardless, this book had a lot of promise but just didn't quite deliver.

The Perfect Mother is yet another book that I wanted to like much more than I did.  It's strange ... So many of the books I've read during the last couple of months were just sort of "meh."  They're not really that great, but they have enough redeeming qualities that I feel okay about giving them a three star rating.

While I can honestly say that I didn't know which direction the story would take, I was a little disappointed that some of it fell under the batshit crazy realm.  And, unlike in The Other Mother, this batshit crazy was just kind of annoying -- it was almost as if the author didn't really know how she should end the book so she just threw out an idea and ran with it.

Although it had its issues, I enjoyed the book enough ... Some parts even (surprisingly) made me laugh!  I also liked that I didn't know exactly what was going on throughout the book since that prevented me from guessing the ending.  I do wish the characters had been a little more developed, though.  I think I would have connected with the story more if I had been more invested in what happened with the characters.

I may have been a little generous with a few of my three star rated books, but I don't think I disliked any of them enough to force them under this category.

I'm happy to report that I also have nothing to share here.

My challenge tallies for the months of May and June: