February was kind of a slow reading month for me.  It's obviously the shortest month of the year (so there are fewer days to read!), but that wasn't really the problem.  I think I was just struggling through a reading rut.

It wasn't that the books I chose were awful.  In fact, I only read one book in February that I really didn't like.  It was really just a me thing.  I watched a lot of TV (which is unusual for me), and allowed that to suck away all of my free time.  It wasn't exactly the best use of my time, but it's what I felt like doing.  Regardless, I still managed to finish five books in February.  (Though I did start one of them at the end of January.)

Also, I'm posting this a day early, but I'll be linking up with Jana and Steph (and a bunch of other book-loving bloggers) tomorrow for this month's Show Us Your Books link-up.  Hopefully most of you had better/more productive reading months than I did! 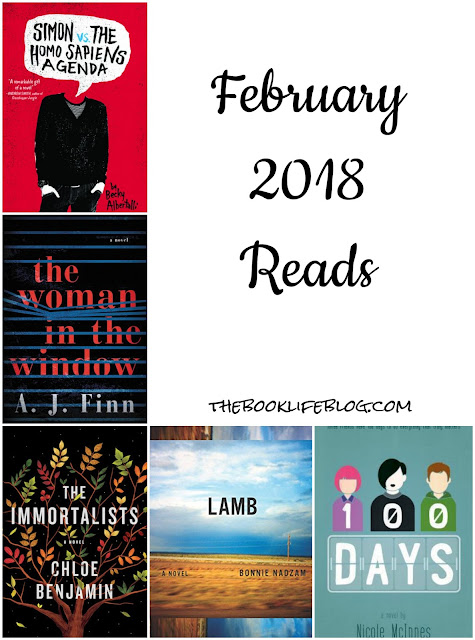 Simon vs. the Homo Sapiens Agenda by Becky Albertalli
Completed: 02/15/18
My Rating: ****
Challenge Category: A book that has a (mostly) red cover for Book Challenge by Erin 8.0

Simon vs. the Homo Sapiens Agenda took me right back to high school.  So many things reminded me of my own high school experience (in a good way): the friendships, the giddy emailing with someone you have feelings for, the amazing feelings that come along with a first love, the theater productions, losing yourself in music ... All of it brought back fond memories.

I really liked the main character, Simon.  He was quite literally a mash-up of my best friend, Kevin, and I.  I love it when I can relate to the characters in some way, so this made reading the book even more fun for me.  I also recently read that a book about one of Simon's friends, Leah, will be released this year.  I'll definitely be checking that out!

One thing that was a very pleasant surprise: the numerous references to Elliott Smith and his music throughout the book.  Elliott Smith is my all-time favorite musician, so it made me happy that Simon loved him so much.  (I also loved the fact that Simon wasn't portrayed as overly depressed or moody or suicidal, which is the way some authors might write a character who is obsessed with Elliott Smith.  Yes, his music got me through some very dark times in my life, but you don't have to be struggling with depression to enjoy it.)

The Elliott Smith references began early on, but it wasn't incredibly obvious.  I kept thinking of "Waltz #2" every time I saw Simon's email address (hourtohour.notetonote), and I'd get the song stuck in my head every time an email chapter popped up ... But I didn't think it was an actual Elliott Smith reference at first.  When, later on, it was confirmed that it was, in fact, a reference to that song, I fell in love with the book a little more.

While the book could be a little cutesy at times, I never found it to be obnoxious -- this was really a sweet, lovely book about friendship and first love that I think most people would enjoy.  It's also been made into a movie that's coming to theaters this week.

The Woman in the Window by A.J. Finn
Completed: 02/22/18
My Rating: ****
Challenge Category: A book with an alliterative title for the 2018 PopSugar Reading Challenge

I just knew I would enjoy The Woman in the Window.  I don't always enjoy every buzzed about thriller (that can be evidenced when looking at the books shared under the "Some Thrillers I Didn't Enjoy" category in this post, as well as in my post about popular/high rated books I didn't like) ... But I had a good feeling about this one.  (This feeling intensified when Steph liked it enough to include it in her January recommendations.)

I'm happy to say that I wasn't wrong about that.  While it wasn't quite spectacular enough to be worthy of a five star rating, it was pretty damn good.

I was very pleasantly surprised by the writing.  I actually had pretty low expectations because I assumed it was going to be a "popcorn thriller" kind of book.  (And, just to clarify what that means for me: "popcorn thriller" is a category for books with somewhat simplistic writing that serves to propel the action forward and doesn't spend much time on character development or description.)  There's nothing wrong with that kind of book (I've definitely enjoyed my fair share), but I was very pleased when I realized that the writing in this book was more sophisticated than that.  I grew to care about the main character, Anna, flaws and all.

I'll echo Steph's sentiment that this is a great thriller for pretty much anyone (even those who don't usually enjoy thrillers).  It's not overly complex, but it does include a few surprises.  I'll admit that I figured out one of the twists very early on, but that didn't diminish my enjoyment of the book -- I was surprised enough by some of the other twists to still feel excitement over the direction the book was taking.

It took me a few days to get through it (only because, as I said earlier in the post, I let TV consume my life last month), but each time I picked it up, I didn't want to put it down.  That's definitely a sign of a great book!

The Immortalists by Chloe Benjamin
Completed: 02/27/18
My Rating: ****
Challenge Category: A book published in 2018 for the 2018 PopSugar Reading Challenge

I have some mixed feelings about The Immortalists.  I clearly liked it a lot ... I mean, I don't give four star ratings to books that I just think are "okay."  I think I just expected a little more from it.  I realize that's kind of unfair, but I began this book with the expectation that it would make me feel things more deeply than it did.

In addition to this lack of emotional response (well, for the most part ... I did get a little teary over one of the sections), I felt like the book was kind of a roller coaster for me (and not in a good way).

The book follows the lives of four siblings, so it was divided into sections that focused on one sibling at a time.  I loved reading about Simon and Klara -- their lives were chaotic and exciting and beautiful and tragic.  I really cared about those characters.  Daniel's section was kind of "blah" for me, and Varya's section was just okay ... There were a few interesting revelations in these sections, but I didn't feel that pull to find out what happened next.  (This in contrast to when I was reading about Simon and Klara and couldn't put the book down.)

This isn't a bad book by any means.  I thought the premise was interesting and unique.  The author is clearly a skilled writer, and I loved that the book made me ask myself difficult questions.  (Would I want to know when I'm going to die?  How would it change my life if I did?  Would I be more willing to take certain risks?  And on and on.)  I just wanted more than I actually got from the book.

Lamb by Bonnie Nadzam
Completed: 02/11/18
My Rating: ***
Challenge Category: A book with a character's name in the title for Book Challenge by Erin 8.0

Lamb has been on my "To Read" list for quite a while, and only recently became available at my library.  Unfortunately, it didn't quite live up to my high (possibly too high?) expectations.  It just never sucked me in the way I thought it would.

Bonnie Nadzam is, without a doubt, a gifted writer.  The main character, David Lamb, was well-developed and a perfect example of a pedophile grooming his victim -- it's creepy as fuck because it's not overly explicit, but readers can still draw this conclusion based on his actions and conversations with the eleven-year-old girl he abducts.  Sometimes the things we imagine are worse than the things we're shown/told, and that was definitely the case here.

I did love that the book really made me uncomfortable.  I know that probably sounds a little weird, but I enjoy having strong reactions to books -- and Lamb definitely delivered that.  This was a disturbing story that filled me with a creeping dread as it moved along.

I really wanted to like this book much more than I actually did.  There was nothing really wrong with it, but there was nothing that really kept me engaged either.
Mostly Awful Books I Wouldn't Recommend

100 Days by Nicole McInnes
Completed: 02/04/18
My Rating: **
Challenge Category: A book with a character suffering from a debilitating physical illness for Book Challenge by Erin 8.0

100 Days is an example of the type of YA novels I don't really enjoy.  The writing felt very "young," and the dialogue was often cheesy, bordering on after school special.  This book was also a little too fluffy for my tastes -- since the story focused on a terminally ill girl, I was hoping it would have more substance.

This book was saved from a lower rating because I liked that the three main characters (Agnes, Moira, and Boone) were all misfits in their own way.  I also liked that the author attempted to develop these characters by giving them real problems and insecurities.  But, while I appreciated the attempts at character development, they unfortunately fell flat and the characters felt a little two-dimensional.

I started this book toward the end of January, and it felt like it took forever to get through it.  I just wasn't that interested in it, and I didn't actually care much about any of the characters.  That's obviously bad enough, but it felt even worse in this case because one of the characters was dying and the whole book takes place during the last one hundred days of her life.  You'd think that would get some kind of emotional response from me ... But no.  It didn't.

I do think this book could potentially work for people who like light-hearted (yes, a book about a dying girl is, in this case, light-hearted), fluffy books.  That's not really my thing, though, so it didn't work for me.

I'm happy to say that I once again didn't read any truly horrible books this month!

My challenge tallies for the month of February: