Have you ever been looking forward to reading a book that has a high rating on Goodreads or has been generating a lot of positive buzz amongst bloggers, only to discover that you don't like it?  And, in some cases, not only do you not like it ... You absolutely fucking hate it.

I'm sure I'm not alone when I say that this has happened to me multiple times.  Obviously I'm not going to fall in love with every book I read, but there have been plenty of times when I've read something and thought, "Was everyone else reading a completely different book?"

Today I'm going to share some of the books I've read that didn't work for me (but others seemed to really enjoy). 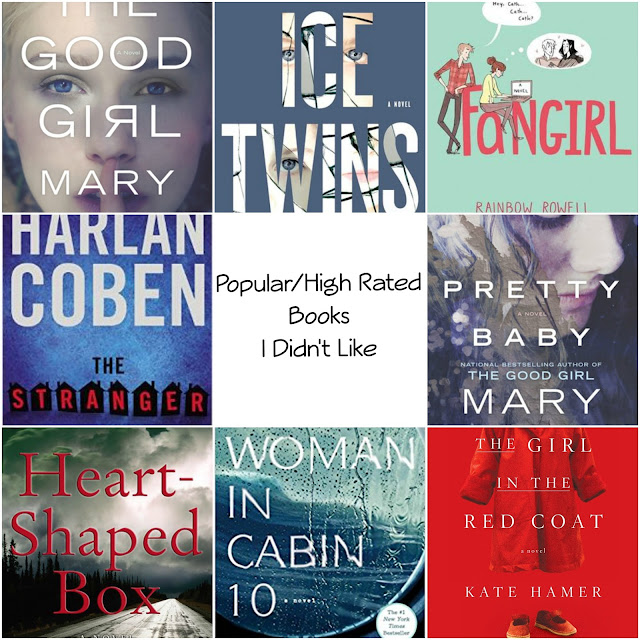 The Good Girl was one of those books that seemed to be very popular amongst bloggers (or maybe just the bloggers I regularly read).  It was popping up on my feed for months, and most people seemed to think it was worth a read.

I was definitely in the minority with my 2 star review.  I didn't like the writing style (it was very choppy and awkward), and telling the story from three different points of view really didn't work.  I actually love books told from multiple points of view (I know some people don't), but not if the voices of the characters are all nearly identical.  And the twist in the end?   Sure it was surprising, but only because it made no fucking sense.  I refuse to share spoilers, but seriously ... A twist needs to make sense in the context of the book.  If it doesn't, it's just sloppy.

I was initially drawn to this book because it seemed to have a lot of 4 and 5 star reviews on Goodreads (not to mention a fairly long waiting list at the library).  That's usually a good sign, right?  Not in this case, apparently.

The Ice Twins was a hot mess.  I couldn't figure out what the author actually wanted from the book because there were too many underdeveloped ideas and random subplots to form a cohesive story.  If that wasn't bad enough, the dialogue annoyed the hell out of me.  I also couldn't understand why seven-year-old children were made to act and speak like babies.  They probably shouldn't act and speak like adults, but I would think most seven-year-old kids have developed a reasonably decent vocabulary and have moved past toddler-like behavior.  (Correct me if I'm wrong ... I have no kids.)  I think I was being generous when I gave this 2 stars.

I really wanted to like Fangirl because nearly everyone I know (or, you know, "know" in the blogging world) absolutely loved it.  It wasn't the type of book I'd usually go for, but that didn't necessarily mean I wouldn't enjoy it.  I mean, I like to mix things up now and then.

Unfortunately, I just really didn't like this book.  I got so angry over the horrible descriptions that were (maybe?) supposed to be awkward, but just came off as bad writing.  I was annoyed with the fanfiction sections.  (I understand why they were there, but they took me out of the story and were just generally awful.)  I hated the overly cutesy characters and storylines.  The book did have a few redeeming qualities, but it still barely deserved a 2 star rating.

This was my first (and so far only) Harlan Coben book.  His books seemed to consistently get pretty high reviews on Goodreads, and the premise behind The Stranger seemed interesting ... So I decided to give him a try.

Maybe I should have paid a little more attention to the mixed reviews before selecting this book.  I did notice, however, that most of the lower reviews came from fans of Coben's work.  I think I just assumed that they were disappointed because it didn't live up to their very high expectations.  (And that's totally understandable.  I don't always love every book my favorite authors have written either.)  But this?  This was a fucking train wreck.  The writing was sloppy and overly simplistic (maybe he had a deadline?), and the book itself wasn't the fast-paced thriller it claimed to be.  In fact, it was a horrible combination of boring and over-the-top-batshit-crazy.  If you couldn't already guess, I gave this book 1 star.

I know ... I clearly don't like Mary Kubica.  I generally like to give authors a chance to redeem themselves, though.  I also have a hard time completely ignoring any sort of thriller/mystery/crime/suspense novel that's having a "moment."  At the time, this book, like The Good Girl, seemed to be everywhere ... So of course I had to read it for myself.

One of my biggest book-related pet peeves is finding glaring spelling and grammatical errors while reading.  If I can catch these things without trying, why can't the editors?  I will never understand that.  I mention this because I found a ridiculous number of mistakes in this book.  That was bad enough, but I was never fully engaged in the story and I found the writing to be bland.  I gave the book 2 stars only because I thought Mary Kubica was able to create unique voices for each of her characters (a vast improvement over her first novel).

I had really high expectations for Heart-Shaped Box.  Sometimes I worry about going in with such high hopes, but I've read plenty of books that have met or exceeded my high expectations ... So it's not like I have impossibly high standards that no book can ever live up to.

Unfortunately, this book was a complete flop.  If I find myself not caring about the characters and rolling my eyes over the way things are playing out, that's a problem.  If I'm bored while reading a book that's supposed to be scary, that's an even bigger problem.  I think I gave this book 2 stars only because it referenced a few bands I like.

Although The Woman in Cabin 10 has received some mixed reviews, I still consider it to be a pretty popular book.  It was read and discussed by many bloggers, it has a fairly high overall rating on Goodreads, and I waited for several months to get it from the library.  Those are all things I'm considering when choosing books to include on this list.

I really liked Ruth Ware's first novel, but I gave The Woman in Cabin 10 a 2 star rating.  My biggest issue with this book was that it couldn't keep my attention -- I just never felt like picking it up.  And the twist?  It wasn't very shocking or surprising ... It was just kind of "meh."

The Girl in the Red Coat by Kate Hamer
(average Goodreads rating = 3.53)

At one time, I felt like I was seeing this book everywhere.  It was listed as a thriller/mystery/crime novel, so, of course, I had to read it.  (The mostly 4 and 5 star reviews that kept popping up on Goodreads helped seal the deal.)

This was a case of a book starting off really strong and then quickly snowballing into a pile of shit.  I can't understand how this book was shortlisted for so many prizes.  While it annoyed me (at least a little) that the book didn't really seem to belong in the thriller/mystery/crime genre, I was mostly frustrated by the story itself.  I gave it 2 stars because of the wonderful beginning, but the rest of the book went off into a ridiculous direction.

What books have you read that didn't live up to the hype?
on 2/08/2018
Email ThisBlogThis!Share to TwitterShare to FacebookShare to Pinterest
Labels: books, lists