A Month in Review: March 2018 Edition

It's time once again to link up with Kristen and Gretchen (and a bunch of other bloggers, of course!) and share what's been going on with me during the past month.  (And just to be completely transparent: it may take me a little while to get around to commenting on a lot of the blogs and responding to comments.  I'm already incredibly behind with reading blogs and responding to comments, and we're doing a lot of family stuff this weekend ... So I won't be around as much until Monday.) 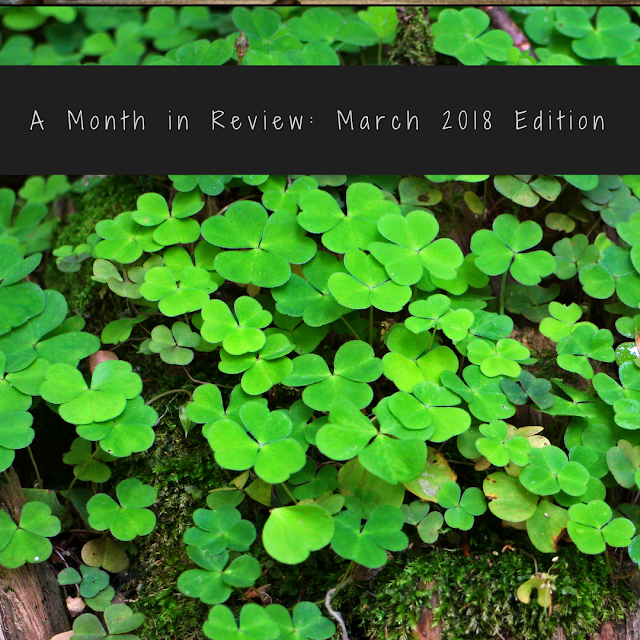 Like February, March wasn't overly eventful.  I spent most of my time relaxing at home with Eric, and I was very much okay with that.  I've been pretty busy at work, so it's been nice to just be able to come home and chill out.  Our weekend schedules were pretty open as well, which was nice.  While it's definitely fun to get out and do things, it's also nice to enjoy stress free weekends with no real plans.

Basically what I'm saying is that I'm old and boring and I like to stay at home.  (Okay, maybe not exactly that ... But it's not that far from the truth.)

March's "highlights" are actually going to be a mixture of random things since there really weren't a lot of major things to highlight:

- I know I mentioned this already in this post, but Eric and I got tickets to see Radiohead in Chicago this July!  It's worthy of mentioning here because it was one of the more exciting moments of the month, and because I've been dying to see them live for 21 years now.

- I was doing a great job of sticking with working out at least three times each week until last week, when I finally fell off the workout wagon.  I worked out last Monday, and then I just ... Stopped.  I'm a little frustrated with myself over this, but I'm trying not to get too hung up on it.  We all have bad weeks/months.  Last week was one of mine.  (I also haven't been spending as much time on my workouts in general, but that's another issue.)

- We made a lot of new recipes at home, and I took some pictures specifically so I would have something to put in this post.  (Sad, isn't it?  These are actually the majority of the pictures I took during the month of March.)  We made vegetarian roasted chickpea and cauliflower tacos, Persian sausage and potato skillet, chicken fajita stuffed baked potatoes with this cilantro lime sauce (this is actually a picture of Eric's plate since his looked prettier than mine ... I didn't use cheese), skillet enchilada meatballs, cajun salmon with red beans and rice, chicken panang curry noodle bowls, Italian sausage and brussels sprouts pasta, vegetarian enchilada casserole (I made quite a few changes to this), and crockpot shredded beef tacos (I've made shredded beef in the crockpot plenty of times, but I'd never used this recipe).  As you can probably tell, I've been on kind of a spicy kick lately. 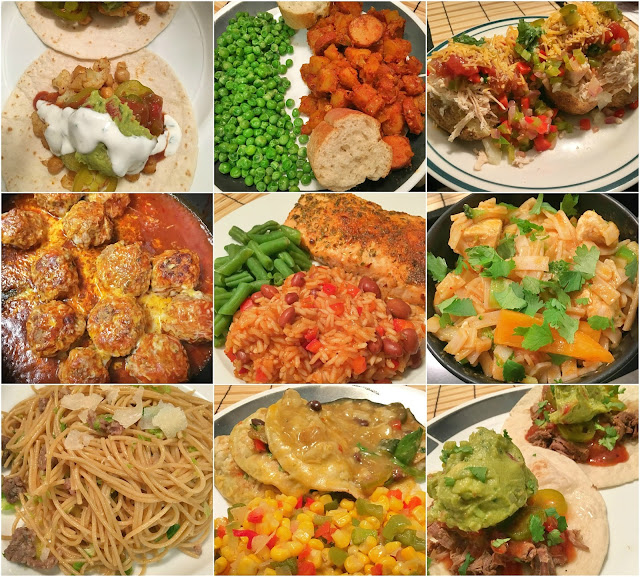 - Eric and I didn't go out for a date night at all last month.  I don't think either of us really even thought about it ... It just didn't happen.  (I actually didn't even realize it until I sat down to write this post.)  We'll be going out more this month when we visit my family, though, so maybe it's a good thing we cut back a little last month.

- I've still been sticking with my savings goals, and I'm pretty proud of myself for that.  It's not that hard for me to just set the money aside in a savings account instead of spending it, but sometimes I do just want to go a little crazy and buy all the things -- so it's good that I've managed to fight those urges so far.

Now I'll share my goals for March.  I'm just going to go ahead and tell you that I failed every single one.  It's fine, I know ... But it's still a little disheartening/embarrassing to post my results when they're basically just a sea of red fails.

Fail - I set a reading goal for myself each month in order to try to keep myself on track for hitting my bigger yearly goal.  (This year my goal is 70.)  I thought it would be pretty easy to get through 7 books since March is a long month (and I didn't really have a lot going on), but I kept getting distracted with other things or just picking books that didn't really work for me ... So I finished the month with a mere 5 books read.  I'm currently one book behind schedule (according to Goodreads), so hopefully I can pick up the pace.

- Try a new exercise class at the gym.

Fail - This one is kind of laughable considering it was a struggle to even make it to the classes I was already taking on a regular basis.  I walked outside on a few nicer days and did some yoga videos at home (in addition to attending some of my yoga classes), but I definitely didn't venture outside my workout comfort zone last month.

- Organize/purge my portion of our master bedroom closet.

Fail - I can't say I'm surprised I didn't bother to do this, but it really does need to be done.  It's going to just keep making my list of monthly goals until I do it.

Fail - I literally only have one book left (and have only had one book left since the middle of February), and I even have it checked out from the library.  The problem is that I keep getting other books from the library that I have to prioritize because they have long waiting lists and/or I just feel like reading other books I have checked out instead.  (I haven't been doing a great job with prioritizing books either ... I've already had to return one without reading it, and may find myself returning yet another unread book next week if I don't get my reading shit together.)  I have until the end of this month to complete the challenge, so I should be able to do it.  Hopefully.

- Finish all lessons and the final exam for my creative writing online course.  (Deadline to finish is 04/06/18.)

Fail - I didn't think I'd have trouble keeping up with this, but I did.  Between being super busy at work almost every day (i.e. staying late most days), getting distracted with other things like blogging and reading and watching TV, and general life stuff, I just fell really far behind.  I thought I could catch up, but I honestly didn't have the motivation to do so after a certain point.  The class was free, so I'm not too upset about it ... But it's annoying because it's unlike me to just say, "Oh well, I'll just give up on this and maybe I'll try again later."  It sucks, but at this point I'm too far behind to finish by Friday.  It wasn't really what I was expecting, and I think that was also part of the problem.  Maybe if I try taking it again (and there's no reason I couldn't), I'll do a better job with it because I'll be more prepared.

And, as always, here are a few statistics from last month:

... And that was March.
on 4/05/2018
Email ThisBlogThis!Share to TwitterShare to FacebookShare to Pinterest
Labels: goals, month in review