When I realized it was time for another "currently" post, I also realized that I really didn't have much to share.  March has been kind of a weird month so far (not bad, just weird), and part of that weirdness is due to my lack of motivation to do much of anything.  Though, to be fair, it's not just a general feeling of "I'm too lazy to want to go out and do anything" ... It's also a feeling of "I spent way too much money in the last month so I'd rather stay home and have a cheap night in."  There's nothing wrong with that, of course ... It just makes for a less exciting life update.  (And a less exciting picture for the post -- I realized the only pictures I've taken this entire month have been of the food we've cooked at home.  So ... That's what you get here.) 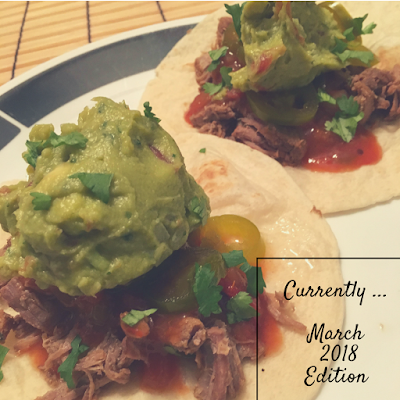 - Reading: Lie to Me by J.T. Ellison.  It doesn't satisfy any reading challenge categories, but I randomly picked it after feeling way too indecisive about what to read next.  It's my sixteenth book for the year, which, according to Goodreads, means I'm on track to hit my goal of seventy.

- Watching: Survivor: Ghost Island.  I used to think Survivor was stupid, and I didn't understand why anyone liked it.  It's grown on me, though, and Eric and I watch it every Wednesday evening.  If nothing else, I like seeing people do things I'd never be able to do.

- Listening To: The new album by The Decemberists, I'll Be Your Girl.  I'm not going to lie: unlike most of their other albums, I think this one is going to have to grow on me a bit.  (I hate that that's the case, but I want to be honest.)  Some songs I loved immediately, while others were just okay.  I think it's important for bands to experiment with their sound over time (which is what they've done with some of the songs here), but sometimes I just want more of what I already love so much.

My favorite track is "Rusalka, Rusalka / Wild Rushes" (which can be found below, if you're interested).  It's very much what I'd expect from The Decemberists (a dark story told within the song), and it's beautiful and haunting and epic and most definitely makes the album for me.

- Cooking: A lot of spicy recipes.  I've been on a spicy kick, so I've been taking every opportunity to add heat to the dishes we make at home.  This also means a lot of Mexican/Tex-Mex style meals ... I'm not even going to pretend that I haven't been happy to eat tacos (you can see one of our recent taco meals in the first picture of this post), stacked enchiladas, burrito bowls, and enchilada meatballs multiple times this month.
- Working On: Not a lot.  I should probably be working on some of my March goals (which I didn't even make until halfway through the month), but I can't seem to motivate myself to get shit done.  I'm hoping that all the bright red "fails" that pop up when I share my goals at the beginning of next month inspire me to do a better job in April ... But we'll see.

- Buying: For the most part, nothing much beyond the necessities (like gas for my car and groceries).  At the very beginning of the month, I bought what will (hopefully) be the last set of concert tickets for a while.  Well, okay, Eric got them since he had time to come home for lunch and set up three computers in an effort to secure the tickets (see the picture below for proof that this is not a joke), but I paid for them since they were for a band a wanted to see. 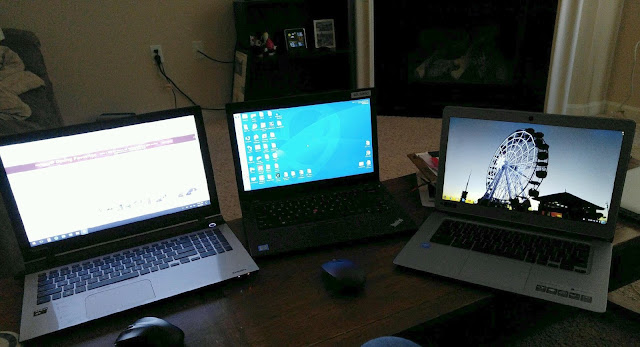 If you're wondering which band has such rabid fans that this crazy setup was actually a necessity, the answer is Radiohead.  We'll be heading to Chicago in July to see them, and I couldn't be more excited!  I've been a big fan since I was 12 years old, so they've been on my concert bucket list for 21 years.  This is clearly a very big deal for me!

- Feeling: Pretty lazy, honestly.  I've been trying to get motivated to do some organizing (my closet in particular needs some serious work), but I always seem to find something else I'd rather be doing.  Imagine that.

- Loving: That I'll be visiting my family in West Virginia in just over a month!  I haven't been back home in quite a while, so I'm really excited to see everyone! (Is it weird that I still call it "home" even though I haven't actually lived in West Virginia in 10 years?)
- Hating: That I haven't been as on top of things lately.  I've definitely been feeling a severe lack of motivation in most areas of my life, but I still hate getting behind on things and feeling like I'm constantly trying to catch up.  A perfect example: my online creative writing class.  I'd say I enjoy it for the most part (and it was free, which makes it even better!), but most days it's hard to feel motivated to come home from work and then sit in front of the computer for a couple of hours to read through a lesson and complete whatever assignments are given.  This clearly extends to blogging as well, since I haven't been the greatest at commenting lately.  Hopefully I'll get my shit together soon and stop procrastinating.

- Discovering: That I really like the song "Palace" by Sam Smith.  It's not the type of thing I normally listen to, but I heard it a while ago on an Apple commercial and couldn't get it out of my head.  (I guess that means the advertisement was effective?)  It's not a song I listen to regularly (because, let's face it, it turns me into a hot sobbing mess every time), but it was notable enough for a mention here ... Especially since it's so different from most of the music I usually listen to.

- Pinning: Not much (again).  I keep meaning to pin some of the recipes we've made recently so I can easily find them again, but I always forget to actually do it.

- Considering: Attempting to go another full week without shopping for groceries.  We'll have to get a little more creative with our meals, but I think we can do it (and use up some of the odds and ends in our kitchen in the process).

- Planning: Our upcoming trip in July to Chicago.  Well, we're starting to plan for it, anyway.  We have the Radiohead tickets and tickets to a Cubs game, but we haven't booked our flight or hotel (yeah, I know) and we haven't really decided what else we'd like to do while we're there.  We'll only be in town for a long weekend (Thursday through Sunday), but any suggestions are welcome.  We're especially open to less expensive things, as we're trying not to go overboard with spending on this trip.  (Stephanie, I'm hoping you might have some ideas!)
on 3/22/2018
Email ThisBlogThis!Share to TwitterShare to FacebookShare to Pinterest
Labels: currently, general, lists