I began last month's book review post by complaining that February was a slow reading month for me.  Unfortunately, March was much of the same.

I actually feel like it's kind of crazy that I read the same number of books in both February and March.  I mean, five books wasn't that terrible for a short month ... But March feels so much longer (even though it's really just three more days), so I feel like I should have been able to squeeze in more than five books.

In the grand scheme of things, it doesn't really matter how many books I read in a month.  But, since I'd like to hit my overall goal this year (and delete a decent amount of books from my out of control "To Read" list that just keeps growing), I know I need to pick up the pace.  I'm also sick of having to return books to the library without reading them and then hopping back onto the huge waiting list.  (This has happened twice in the last two months.)

I know that most people probably don't want to read my complaints about my slow ass reading issues, though, so I'll move on to the reviews.  I'll be linking up with Steph and Jana tomorrow for this month's Show Us Your Books link-up (and adding about a million more books to the aforementioned "To Read" list).  I'm looking forward to checking out what everyone else has been reading lately! 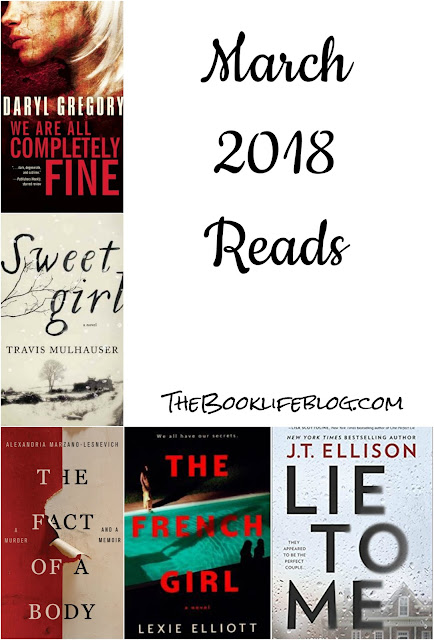 This is the second month in a row that I haven't read any amazing, five star worthy books.  This could definitely be part of my reading rut issue.

This is a very short book (a novella, really), but I think I would have sped through it in a couple of days even if it was considerably longer -- it captured my attention from the start, and didn't loosen its grip on me.  This book had been on my "To Read" list for a really long time, and I'm glad that it didn't disappoint.

I was actually kind of surprised I enjoyed We Are All Completely Fine as much as I did because it contains several supernatural/fantasy elements, and that's just really not my thing at all.  (I usually hate or at least dislike most books that rely on fantasy and the supernatural to tell the story.)  In this case, though, it worked -- the story is told in such a way that I was easily able to suspend my disbelief and imagine that these characters were real people who had experienced some very traumatizing things.

I really liked all of the characters, and found each of their stories fascinating.  My only major complaint about the book was that it was too short -- I would have liked more time with these characters to learn even more about them and their pasts.  That being said, I think the author did a great job delving into each character's story in such a small amount of space -- I didn't expect to learn as much as I did about each of them.

This is a very weird book, so I don't think it's something I'd recommend to just anyone.  But if, like me, you're a fan of really strange, dark entertainment, this book is probably for you.

I added this book to my "To Read" list a while ago after Jana gave it a glowing review, and, after reading it, I can understand why she enjoyed it so much.

Sweetgirl almost seemed cinematic in its delivery: I could definitely imagine all of the action taking place on a screen.  The story sucked me in immediately, and it held my interest throughout.  Most of the events take place within a couple of days, and the author did an excellent job maintaining a fast pace to allow the reader to feel at least some of the pressure and intensity the characters were experiencing.

The main reason this wasn't a five star read for me was the fact that I never truly connected with any of the characters.  I really wanted to fall in love with the main character, Percy, since she had so many great qualities that usually make a character a "favorite" for me ... But I just didn't.  I also didn't feel overly moved by the story, which was really surprising given the subject matter.

Overall, this was an enjoyable read.  I liked the dark humor throughout the book, and that it offered an interesting look at a way of life I've (thankfully!) never experienced.  If you like fast-paced, gritty stories, Sweetgirl is worth checking out.

The Fact of a Body: A Murder and a Memoir by Alexandria Marzano-Lesnevich
Completed: 03/07/18
My Rating: ***
Challenge Category: A true crime book for the 2018 PopSugar Reading Challenge

I really liked that the author created a true crime/memoir hybrid with this book -- it was a unique twist on two nonfiction genres, and I appreciated that it was unlike anything else I've ever read.

That being said, while I understand the reasoning behind intertwining her own experiences with a murder committed by someone else whom she had no contact with prior to learning about the crime, at times it felt a little weird ... Especially considering that she reconstructed many of the events related to the murder using her imagination.  (This is something she freely admits throughout the book.)  It made the true crime portions ring less "true" for me.

The book itself was well-written -- the author definitely took the "creative nonfiction" approach to make it feel more like a story.  Unfortunately, some parts of the book felt a little repetitive.  I understand emphasizing certain things to make a point, but sometimes I felt like I was being beaten over the head and I didn't like that.

In general, I have a hard time rating nonfiction (memoirs in particular) higher than three stars.  I usually enjoy reading about another person's life, but it's not something I'm overly eager to pick up or something I really think about a lot once it's over.  While I think this book is probably worth reading if you're a fan of true crime and/or memoir, it's not something I'd recommend pushing to the top of your reading list.

I didn't really have any expectations going into this book, and I think that allowed me to appreciate it a little more than I might have otherwise.  (Maybe ... As you'll see, I really can't figure out why I felt this book was worthy of a three star rating.)

When it comes to thrillers, I can enjoy them regardless of whether the story is incredibly fast-paced or more of a slow burn ... But I also know that some people dislike slower moving thrillers, and are quick to quit the book if it's not keeping them on the edge of their seat.  If you're one of those people, you will not like this book.

I was actually surprised that I liked the book enough to give it a three star rating.  There was nothing overly special about it, but it held my interest and entertained me.  I knew I'd have a hard time writing a review for this book because I could never really pinpoint what it was that made me like it and want to continue finding out more.  As far as thrillers go, it wasn't overly suspenseful and it didn't deliver any major surprises or shocking twists.  I feel like this would normally make me go off on a crazy rant about how shitty and horrible the book was ... But, for whatever reason, The French Girl did just enough to work for me.

This book is most definitely not for everyone.  (I'm not even sure why it was for me.)  If you add a lot of books to the "DNF" pile, don't even bother -- I can almost guarantee you won't be finishing this one.  I found it entertaining enough, but it's nothing special.  If you're dying to read it, you should give it a shot.  Otherwise, use your best judgment: if it sounds like something you might enjoy, read it.  If the synopsis doesn't intrigue you, you're probably better off skipping it.

I struggled with this book on so many levels, from simply getting through it to finding the right rating and words to express how I felt about it.

On the surface, this book seemed perfect for me: it's a psychological thriller, there's a missing person involved, the two main characters are writers (for some reason I love reading books and watching TV shows/movies about writers), the narrators are pretty unreliable, and there are a ton of surprising twists throughout the book.  Unfortunately, having all the right elements just wasn't enough.

There were several things about this book that literally made me angry.  I initially gave it a three star rating because I knew that some people would probably enjoy it, but I changed my rating the next day after realizing just how pissed off I was about this book.

Because I always avoid spoilers in my reviews, I can't share several of the things that pissed me off ... But I'll talk about what I can.

The first section of this book felt like a Gone Girl rip-off.  You know how a ton of book summaries annoyingly tout them as "the next Gone Girl?"  Well, Lie to Me actually tried to be the next Gone Girl ... And let me just say, Gillian Flynn's book is far superior.

After I slogged through the first section, I just kept getting more and more annoyed with the story.  The characters were supposed to be intelligent, but they kept making idiotic, unrealistic decisions.  And the twists?  It basically felt like the author was like, "Let's see how many crazy ass things I can throw into this book."  It didn't matter if they made sense in the grand scheme of the story (or if they made sense at all, for that matter).

I haven't felt this angry about a book in a while.  I've read a couple of lackluster books this year that I wished I hadn't wasted my time on, but I feel like Lie to Me is an entirely different animal.  The only reason this book managed to get two stars out of me is the same reason I gave it a higher rating to begin with: I think it could appeal to some people.  (I mean, that's pretty clear given the number of three, four, and five star ratings on Goodreads.)  For me, though, this book was a shit show that wasn't worth the paper it was printed on.

If Lie to Me didn't have such mass appeal, it would have landed here.  Thankfully I didn't read anything else last month that would deserve a spot under this category.

My challenge tallies for the month of March: