Three Things About Me

I posted another three things about me post last month, borrowing prompts from Jana.  I considered borrowing her prompts again this month, but found some others I wanted to use instead.  (Confession: I have no idea where these prompts originated.  I found them on my very old LiveJournal and decided it would be fun for me to see how much I've changed over the years.  I considered posting my old answers with my new ones, but I don't know that anyone else would care about that.)  I also added a couple of additional prompts because I can.

I still haven't bothered to write anything for an "About Me" area of this blog (I know, I know!), but here are more random facts about me.  Because everyone enjoys reading random facts.  (That probably sounds sarcastic, but I actually do.) 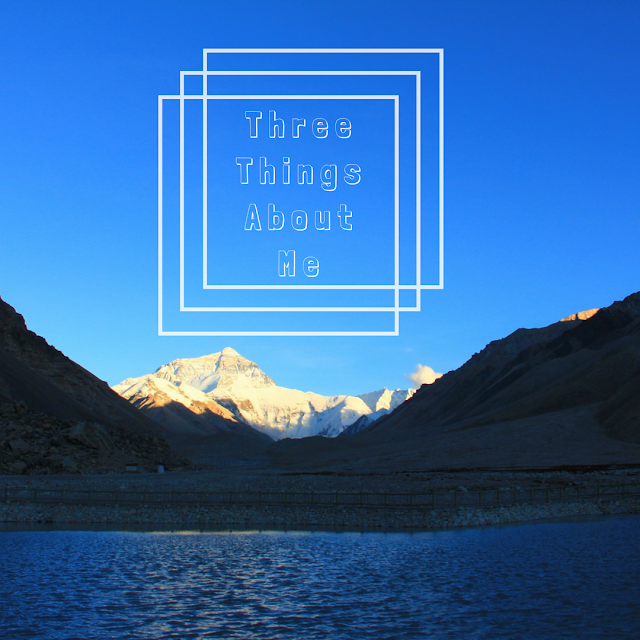 (In an effort to narrow this down a bit, I'm going to only list restaurants in Omaha that I eat at regularly.)

- Macaroni and cheese (no, I'm not kidding)
- Peppers of any kind (I'll even put jalapeño peppers on my pizza)
- Spinach
Three movies I can watch over and over:

Three gadgets I can't live without:

- My laptop
- My phone
- My Apple AirPods

- Biting my nails (I know it's gross, but I do it anyway)
- Hitting the snooze button way too many times every morning
- Eating huge portions (I just love food too much, I think)

Three places I'd like to visit before I die:

I had to tack on the "in the last 10 years" part in order to narrow it down a little.  It was still almost impossible to choose only three!  I was going to narrow it further (down to the last 5 years), but I really wanted to include Alexisonfire.  (I was so excited to see them live that I thought my heart would burst!)  I feel like I left off so many amazing bands/artists, though.

- Fiona Apple
- Nine Inch Nails
- The Mars Volta (though according to Cedric Bixler-Zavala's Twitter, this won't be happening for a long time):

I appreciate the rabid infection that spreads when anything Volta is discussed, but it’ll be a while b4 that ship takes off. Still got a lot of ground to cover w my current family @AtTheDriveIn all I did was praise a fans enthusiasm & casually mention volta being a thing.
— CEDRIC BIXLER ZAVALA (@cedricbixler_) February 11, 2018

I considered picking Radiohead and A Perfect Circle for this prompt, but I'm going to see both of them later this year.  (Yay!)  I figured it would make more sense to pick bands/artists I may not get to see for a while (or ever).

I like filling these out, but it was somehow more difficult this time.  Maybe I didn't want to be influenced by my previous answers?  I have to admit, though, that several of them haven't changed.  I originally answered these prompts in late spring 2008, so it's been almost 10 years.  I guess I'm consistent.
on 3/15/2018
Email ThisBlogThis!Share to TwitterShare to FacebookShare to Pinterest
Labels: about me, general