February has been kind of a weird month so far.  I know it's the shortest month of the year, but it has felt unusually speedy this year.  I feel like I blinked and suddenly we're in the last full week of the month.  Maybe I feel this way because I haven't completed the majority of my monthly goals.  (And, to be honest, I probably won't finish most of them.)  All I know is that the month has flown by, and I kind of wish time could slow down (at least a little).

Anyway, here's what's going on with me these days: 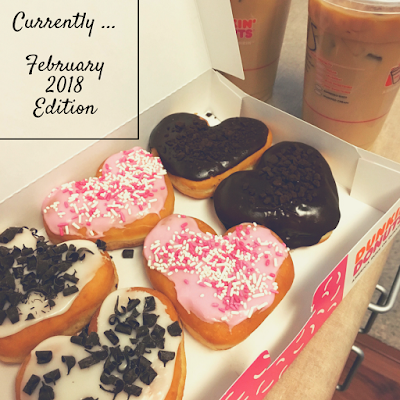 - Reading: The Woman in the Window by A.J. Finn.  I thought I would be finished by now, but I haven't had as much time to read as I would like.  When I do have time to read, though, I really don't want to put it down!  It's my tenth book for the year and my first book for the 2018 PopSugar Reading Challenge.

- Watching: Brooklyn Nine-Nine on Hulu.  I'd seen a few episodes here and there and thought it was pretty funny, so now I'm watching it from the beginning.  It's ridiculous how much Eric and I laugh over some of the episodes!

- Listening To: A wide variety of things, though I've been semi-obsessed with "TalkTalk" by A Perfect Circle, "Charm Offensive" by Islands, and "High Hopes" by Pink Floyd lately.  They tend to be repeated over and over and over again day after day.  You'd think I'd be sick of them by now, but that's definitely not the case.

- Cooking: Not that often in the last week or so.  Eric cooked the majority of the meals last week because I felt like complete shit every single day.  I think I'll keep him around.
- Working On: Getting caught up on things.  I was really on top of things last month, but, as I said at the beginning of this post, this month has gone by way too fast.  I'm going to try to focus on getting caught up on blogs this week.  It definitely helps that I'm not participating in any link-ups.  As much as I love them, I definitely get behind with reading other posts when I'm involved in a link-up!

- Buying: Concert tickets.  I know that I'm trying to save more and spend less, but I'm not even mad that I spent $185 for A Perfect Circle tickets earlier this month.  I've seen Maynard James Keenan live once (with Tool on my 18th birthday!), but I've never seen him performing with A Perfect Circle.  I am ridiculously excited about this show, even though it isn't happening until May 15th.  We're also planning to get tickets for The Smashing Pumpkins this week for an August show.  Eric's never seen them live, and I last saw them in 2007.

- Loving: The fact that there is literally a YouTube video for pretty much any workout I want to do.  I wasn't feeling up to going to the gym at all this week, but I forced myself to do a few workouts at home.  I specifically wanted things that were "light" since I wasn't feeling amazing, and there were tons of options for the things I felt like I needed/wanted at the time.  I've been using YouTube workout videos when I couldn't get to the gym for a long time, but I don't think I'd ever really looked for such specific workouts before.
- Hating: Gun violence.  It's so sad (not to mention scary!) to live in a world where school shootings have become commonplace.  I'm not a parent, but I can't imagine how difficult it would be to not only discuss these things with my child, but also to send that same child off to school each morning with a pang of fear that maybe he/she won't return.  No one should ever have to experience that kind of fear, whether it be a parent, child, or teacher.  This can't go on.

- Discovering: That I care more about certain things than I initially thought I would.  Yes, I'm being vague and yes, I know that can be irritating.  I'm sorry.  I'll elaborate more when I'm comfortable doing so.

- Considering: Making "try a new group exercise class" one of my goals for March.  There are a few classes I want to try, but I seem to always just stick with my tried and true yoga classes.  I should really try to mix it up once in a while and take advantage of more things offered at my gym.

- Planning: My topic for a short creative piece I have to write and submit at the end of the six week creative writing class I'm currently taking.  I got a random idea for the story a few days ago, but I'm still trying to work through the details.

on 2/20/2018
Email ThisBlogThis!Share to TwitterShare to FacebookShare to Pinterest
Labels: currently, general, lists