What My Book Ratings Actually Mean

I think it's probably safe to say that everyone's rating system differs (at least to some degree).  While I try to consider a site's definition for each rating (like the five star rating scale on Goodreads, for example), most of the time my ratings take on a more personalized life of their own.

I know that Steph and Jana's Show Us Your Books link-up won't be for another couple of weeks, which means that my book reviews for January won't be posted until then.  However, I wanted to go ahead and share some insight into the way I rate the books I read. 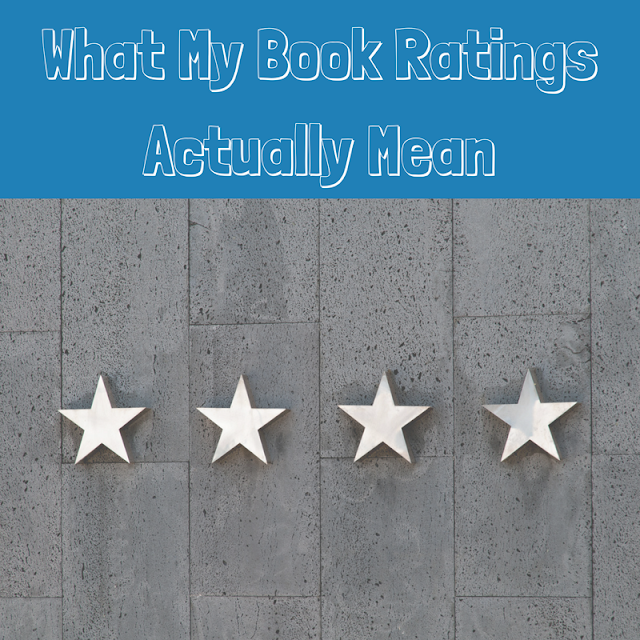 - The book touched me on a serious emotional level (a.k.a. I probably sobbed hysterically at least once while reading it)

- I thought about the book a lot, whether I was currently reading it or not

- The writing was beautiful, and inspired me to want to work on my own creative writing

- There were a lot of shocking or surprising twists (this is mostly just for thriller/crime/suspense/mystery novels, but really any type of book could earn a five star rating if it shocks or surprises me in some way)

- The book really made me think -- whether I'm learning about a different culture, considering an issue from another point of view, or simply being challenged intellectually, this type of book will stick with me for years to come and be well deserving of a five star rating

- The character development is fantastic -- if I really care about the characters, I'll fall in love with the book

- The story was very unique/different from anything I've ever read, but, for whatever reason, it didn't quite captivate me the way a five star read would

- The majority of the book was compelling, but something about it just didn't quite work for me (side note: I have given a few books five star ratings in the past if I really loved everything but the ending, but I don't intend to do this going forward)

- The writing was very good, but not what I'd consider great

- The book was enjoyable overall, but not something I'd really think about beyond the final page

- I would recommend it to others, but with much less enthusiasm than a book I rated five stars

- I'd remember the book as being good, but I may not be able to fully articulate why I liked it

- It took me a while to get into the story, and it may not be the right book for someone quick to add things to their DNF pile

- It wasn't a bad book in any way, but nothing about it really stood out

- The plot was very promising, but the execution was just okay

- The characters weren't particularly relatable or interesting, and I didn't really care about their fates as the story went on (though the story itself kept me interested enough to continue reading)

- When giving recommendations, I wouldn't say that someone shouldn't read it ... I would, however, say that it's not something I would prioritize when choosing my next book

- I didn't expect much from the book (maybe because it fell under a category/genre I don't normally read or because it generally received lackluster reviews), but it was pleasantly engaging -- I didn't love it, but I thought it was enjoyable enough

- The writing was pretty awful, but the overall plot was decent

- The story had a lot of promise, but the author failed to engage me in any meaningful way

- I liked something about the book, but it was kind of a mess overall

- The book was fairly well-written, but the subject matter felt overdone and cliché -- I didn't really gain anything from reading it

- Too many things are going on at once -- a book doesn't need a bunch of half-assed subplots floating around, detracting from the real story

- The characters felt like two-dimensional cardboard cutouts of what a "police officer," "best friend," "serial killer," etc. should be

- The supposed "twist" is something ridiculous that either makes no sense based on the information provided in the story or is something I saw coming early on (again, this mostly applies to thriller/crime/suspense/mystery novels, but could pertain to other genres as well)

- I feel like I wasted my time on the book, but I think it could potentially appeal to other readers
A 1 Star Rating Means:

- There was no saving grace here: the writing, plot, characters, etc. were all horrible

- I would recommend avoiding it at all costs

As you can see, there are a lot of reasons why I might assign a book a certain overall rating.  Sometimes it's easy to rate a book ... Other times I waver between two ratings.  I don't give partial ratings (like 3.5), so sometimes it's tough to determine where a book falls on my scale if it has several characteristics from two different ratings.

I try to put real thought into my ratings (and, of course, my reviews).  While I think everyone should come to their own conclusions about the books they read and the books they should consider reading, I also know that sometimes it can be helpful to hear/read the opinions of others.  (Especially if they have similar taste in books.)  You can always expect honest reviews from me, even if I do sometimes feel bad for shitting all over another person's work.

I'd love to read other posts about personal rating systems for books!  If you've already written something like this, please share your link in the comments.  If you haven't, I'd love to read your thoughts about this topic in the comments (or in a future blog post).
on 1/30/2018
Email ThisBlogThis!Share to TwitterShare to FacebookShare to Pinterest
Labels: books