One of the main things I missed about blogging was sharing my thoughts on the books I read throughout the year.  Today I've compiled a general list of my ten favorite and ten least favorite reads of 2017.  They are listed in the order I completed them.

Since I only reviewed my books using the Goodreads star system last year, I'm relying heavily on my memory for this post.  For that reason, these reviews may not adequately explain just what made me love (or hate) a book.  I'll do my best, though.

*ETA: I decided to use this post for the first Show Us Your Books link-up of 2018 with Steph and Jana.  Since I wasn't blogging last year, I didn't get to share my favorite books of 2017 in the previous link-up.  (I also haven't finished many books since the year started, so there wouldn't be much to talk about here if I shared those reviews.)  Next month I'll share my January reads. 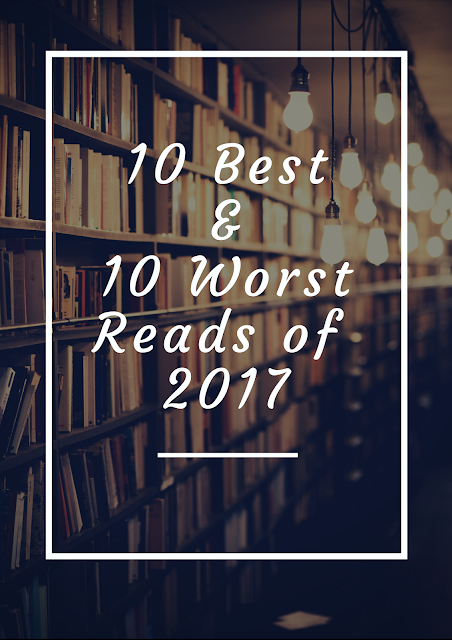 I really didn't enjoy Fangirl, but I wanted to give Rainbow Rowell's books another try.  Everyone seems to love her, and she's from Omaha ... So I pretty much had to give her that second chance.  Thankfully I did, because Eleanor & Park was one of my favorite reads of 2017.  The story is both sweet and sad, and it seemed to perfectly capture the intensity of young love.  I also loved that the main characters weren't perfect and didn't look like supermodels -- they were awkward teenagers with real problems, and I cared very deeply for them both.

2.) The Smaller Evil by Stephanie Kuehn

This book was one of those that make you think, "Oh my God, what the fuck am I reading?" about a hundred times.  I typically love those types of books, and this was no exception.  The Smaller Evil wasn't really what I was expecting it to be, but that wasn't a bad thing.  It was weird but completely engrossing -- I finished it in about 24 hours because I just couldn't put it down.

3.) The Woman Before Me by Ruth Dugdall

I love a story with lots of twists, and The Woman Before Me definitely delivered!  The pace was perfect for this type of novel, as the pieces of the main character's story were slowly revealed.  Everything I thought I knew about her would suddenly shift to form a very different picture (and then another and another) as more of her story was brought to light.  And the ending ... Whoa!  I'm the type of reader who loves a shocking or surprising ending, and that's exactly what I got.  I remember thinking about it for days after I finished the book.

This was yet another twisty thriller that continued to surprise me as I read.  I was genuinely shocked by many (if not all) of the reveals, and I found myself needing to know what would happen next.  While Blood Wedding wasn't as realistic as some thrillers I've really enjoyed, the story was told in such a way that I did believe it.  Thank you for fucking with my head, Pierre Lemaitre.  (And I mean that sincerely.)

Clearly there is a bit of a theme when it comes to my favorite books of 2017.  Once again, I fell in love with a completely disturbing and twisted thriller.  (Basically total mindfuck = amazing in my eyes.)  Confessions was full of surprises, and the story itself stuck with me for a long time after I finished the book.

6.) The Boy Who Could See Demons by Carolyn Jess-Cooke

This book was actually quite different from what I expected, and as I read, I grew to love it more and more.  It was unlike anything I'd ever read before, and parts of it just broke my heart.  The Boy Who Could See Demons isn't a thriller, though it does read like one at times.  It contains just as many twists as some of the other books on this list, but it also has an emotional element that can evoke plenty of tears.  (Or maybe that was just me.)

7.) The Girls in the Garden by Lisa Jewell

As an adult, I think it's sometimes easy to forget the cruelty and jealousy of the teenage years.  The Girls in the Garden brings the reader right back to those days.  This twisty thriller sucked me right in -- I finished this book over a weekend because I just couldn't put it down.  Every time I stopped reading to do something else, my mind would wander back to the story and I'd have to abandon everything and pick it back up.  If that isn't a sign that a book belongs on this list, I don't know what is.

8.) The Bluest Eye by Toni Morrison

This book was written in a way that probably wouldn't work for some people, but it really worked for me. The storytelling in The Bluest Eye was amazing.  I read this in about 24 hours, though its hold on me was much different than that of a thriller.  It's a brutally honest look at racism and self-hatred, and definitely worth a read.  (Particularly in these troubled times we're living in.)

9.) All Is Not Forgotten by Wendy Walker

I finished this book in two days because I couldn't deal with anything else until I knew what really happened the night a young girl was brutally raped.  This story offered plenty of the twists I love, and the ending delivered that "Oh my God!" moment I crave in thrillers.

I checked Bird Box out of the library a long time ago but never got around to reading it before it was due.  I finally decided to check it out again a few months ago, and I'm so glad I did!  I loved the sense of dread that existed throughout the novel.  I loved the strong female main character.  I loved the mindfuck of a terror that cannot be seen or named.  Basically I just loved this book, devouring it in a couple of days.

I don't know why I continue to read reimagined fairy tales when I so obviously hate them.  Maybe I'm hoping I'll eventually find one I love?  In any case, Alice was definitely not the one.  I pretty much hated everything about this book, from the story to the writing itself.  I was actually relieved when it was over.

2.) The Girl in the Red Coat by Kate Hamer

This was a case where a book was nothing like I expected, but the direction it took was so terrible that I felt cheated.  (It also didn't help that the book began with such promise.)

3.) All the Truth That's in Me by Julie Berry

The synopsis claims "this startlingly original novel will shock and disturb you."  None of that rang true for me.  It bored and annoyed me, and every time I thought it might be getting better it just let me down again.

4.) The Bird Eater by Ania Ahlborn

I consider myself a fan of the horror genre, but I'm often disappointed by horror novels.  The Bird Eater just wasn't scary.  At all.  If I'm reading a horror novel, I expect to be scared (or, at the very least, unsettled).  This one just didn't do it for me.

I was so disappointed in Fledgling.  I was expecting an intriguing vampire story with a very young looking main character (similar to Let the Right One In, which I really enjoyed) that also touched on themes of race and feminism.  Unfortunately, the execution of the story was so poor that it just fell flat.  Everything was just too damn convenient.  And, to be honest, it also felt a little gross since the very young looking vampire was portrayed as a hypersexual girl in a totally "normal" and "healthy" relationship with a human adult male.  No, just ... No.  She looked like an eleven-year-old child.  (Not to mention the fact that he didn't even know she was a vampire when he was first attracted to her.)  I can handle a lot, but the way this relationship was portrayed was just too much for me.

6.) Daughters of the North by Sarah Hall

I wanted to love Daughters of the North, but it just felt like a cheap imitation of The Handmaid's Tale.  I understand that novels with similar themes may seem, well, similar ... And that's okay.  I just felt like the author was trying too hard to write the next great feminist dystopian novel without putting in the effort to create interesting characters the reader could care about.

This is yet another case of a reimagined fairy tale that was definitely not for me.  I think I must have blocked most of this book from my mind because I can't remember any of the specific reasons I hated it ... Just that I did.

While Hex was not horrible in the way that some of the other books on this list were, it deserves a spot here because it was such a let down.  There were some genuinely scary parts, and it was well-written.  Unfortunately, at some point it just got really boring.  It took me a week to finish it because it was dragging so much.  I wish it had been a little different because it had such promise.

No book I read in 2017 was as boring as Last Days.  (And there are few things worse than a boring thriller/horror novel.)  I spent two weeks slogging through the fucking thing!  Eric kept saying, "That book must really suck since you seem to fall asleep after like two minutes every time you open it."  That's no exaggeration.  I know I should have just quit it, but I can never seem to quit books no matter how awful they are.  I'd also heard so many good things about Adam Nevill that I was convinced it would get better.  It didn't.

10.) Dying for Christmas by Tammy Cohen

I picked this book up at the library on a whim because I was curious to see what a Christmas thriller would be like.  This book wasn't horrible (it even had some interesting twists that made me want to keep reading) ... It just wasn't really good either.  Dying for Christmas annoyed me because it could have been a great thriller.  The problem was that, at some point, it began to feel like a Fifty Shades of Grey fanfiction.  In addition, the bad guy was annoying as fuck, and by the end so many over-the-top things had happened that it just felt silly.

Overall, 2017 was a year filled with great books.  I feel like I left a lot of amazing books off my favorites list (mostly because I wanted to keep it down to ten), and had a difficult time trying to determine which books were bad enough to make it on to the "worst" list.  I'm hoping 2018 will be my best book year yet!

And, of course, if you've read any of these, I'd love to hear your thoughts!
on 1/04/2018
Email ThisBlogThis!Share to TwitterShare to FacebookShare to Pinterest
Labels: books, lists, show us your books