A Month in Review: February 2018 Edition

I'll be honest: I've been completely slacking when it comes to blogging lately.  Translation: I wrote this at the last minute so I'd have something to share in the link-up with Kristen and Gretchen.  I'll try to be better in the future.  (Emphasis on the word try.) 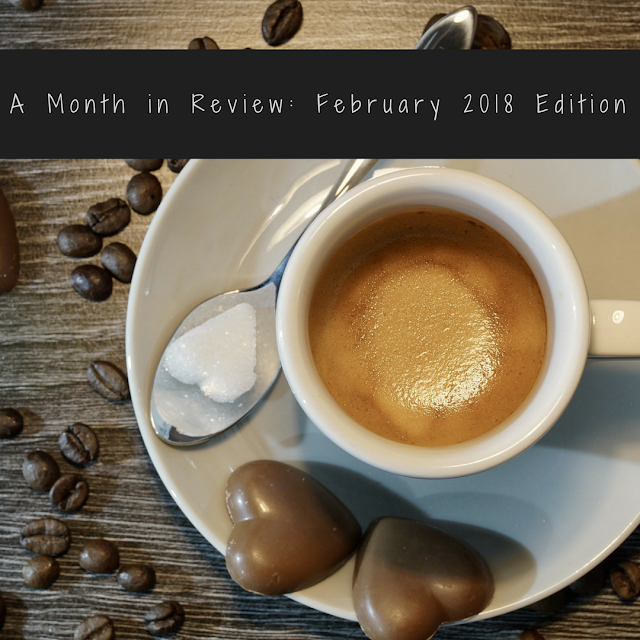 February was just an okay month.  It wasn't horrible by any means, but it wasn't spectacular either.  I'd like to say I was really productive and hit every goal I set for myself this month, but that's definitely not the case.  I spent most of my free time lounging around the apartment with my husband, watching TV.

There aren't a lot of highlights this month (mostly because I really didn't do much), but here a few noteworthy things:

- I started the free, six week, online creative writing course I mentioned in this post.  I'm enjoying it so far, though I'll admit that it wasn't exactly what I was expecting.  It's somewhat interactive, as you can post on private discussion boards that only other members of the class can read and respond to, but I guess I was hoping for a little more interaction.  I do think it's helping me think about writing in a different way, though -- I caught myself picking out some of the things discussed in one of the lessons while I was reading a book.  I guess that means something is sticking!  I've only gotten through a few lessons (it started on the 14th), so I'll be interested to see how the instructor continues to build upon the topic.

- I tried a lot of new recipes, and actually remembered to take pictures of some of them!  The pictures below show the NYC Halal truck lamb platter (that one was probably my favorite!), one pot cilantro lime chicken and rice (Eric made this one), roasted salmon with avocado salsa, vegan chickpea tikka masala, and chicken and rice with coconut milk and pistachios.  And yes, I do realize that every single one of those meals included rice.  We do eat other things, but rice is definitely a staple in our household! 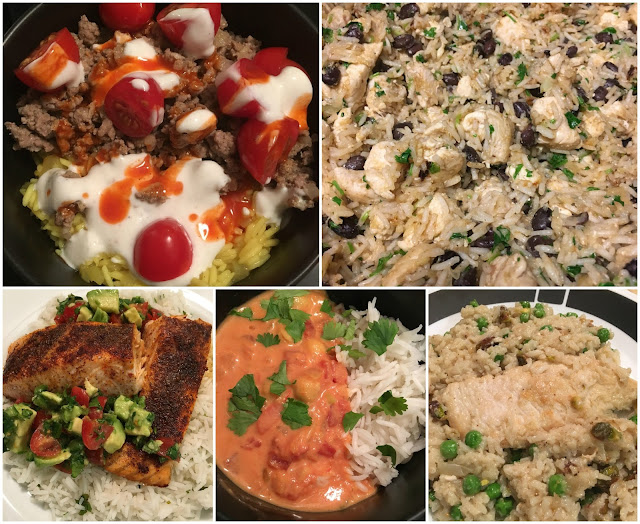 - Eric and I got tickets to see A Perfect Circle and The Smashing Pumpkins.  I know I've already mentioned this several times, but it was a slow month.  (And I'm excited.)

- We also opened a new high yield savings account and put some more money into a CD.  We probably should have been doing this from the beginning (at least the high yield savings), but, for whatever reason, we never did.  I'm glad we're doing it now.

- We had a dinner and a movie date night last weekend.  I gorged myself on super fattening (and, of course, delicious!) food and then enjoyed The Shape of Water.  I've been wanting to see it since I first heard about it, and while it wasn't as amazing as my favorite Guillermo del Toro film, Pan's Labyrinth, it was really good.  Well, I thought so ... Eric said it was "okay," but he was impressed with the acting.  If you're on the fence about seeing it, I'll tell you that it's very strange (so you'll hate it if you don't like that sort of thing), but it also touched me on a level I can't even explain: I was sobbing hysterically at the end of the movie, during the drive home, and for at least half an hour or more after we got home.  (I'm obviously a really fun date.) 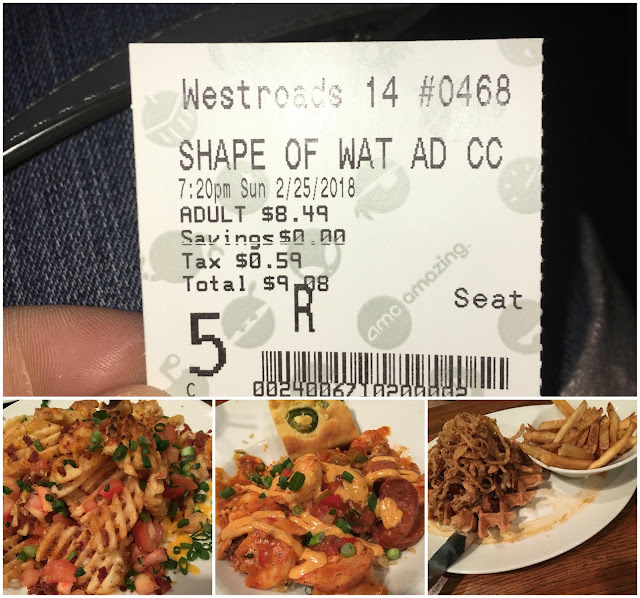 Now I'll move on to my monthly goals for February.  I did a pretty good job with my goals in January.  In February?  Not so much.

Fail - I was really close (I finished 5 books, or 4 if I don't count a book that was started at the end of January but not finished until February), but I definitely didn't read as much as I wanted to.

Fail - I was really close with this goal as well -- I only need to finish one more book to complete the challenge.  The problem was really timing: I got a couple of books from the library with long waiting lists, so I had to shift my priorities.

- Write an "About Me" section for my blog.

Fail - I clearly didn't do this.  I know I need to ... I actually need to do a lot of things when it comes to this blog.  But, as you'll see when I go over my remaining goals for February, I haven't bothered to do any of them.  Whomp whomp.

- Find and purchase a template for my blog for a cleaner, updated look.

Fail - I actually thought this would be one of the easiest goals for the month.  I've been looking at a lot of templates online (and if anyone has any recommendations for blog designers, I'd love to hear them!), but I haven't gotten beyond the "that looks nice, maybe that could work" stage.  I don't love the way my blog looks right now.  I actually didn't think it would look like this for more than a month.  And yet it's now March 1st, and it still looks like it did the day I published my first post.  I think I'm just being a combination of picky and lazy, but I really do want to do this soon.

- Organize tabs/sections for my blog.

Fail - Once again, I wanted to do something to make my blog better ... And once again, I failed.  While this will never be more than a fun hobby for me, I still want my blog to look nice and be easy to navigate.  Maybe this month will be the month I finally get my shit together and make this blog look the way I want it to.  Maybe.

Finally, I'll share a few statistics from last month.  Maybe this will make me feel a little better about failing at every single one of my goals.

... And that was February.
on 3/01/2018
Email ThisBlogThis!Share to TwitterShare to FacebookShare to Pinterest
Labels: goals, month in review