A Few Things That Irritate Me

Last month I wrote about a few things I love, so this month I decided to share a few things that irritate me.  Some are pretty insignificant in the grand scheme of things (Steph shared some of her petty annoyances back in January that helped inspire this post), while others are much more serious.  Regardless of whether or not these things are petty, they are all, in my opinion, 100% justified -- if they piss me off, put me in an awful mood, and/or make me want to cry with frustration, they deserve a place on this list. 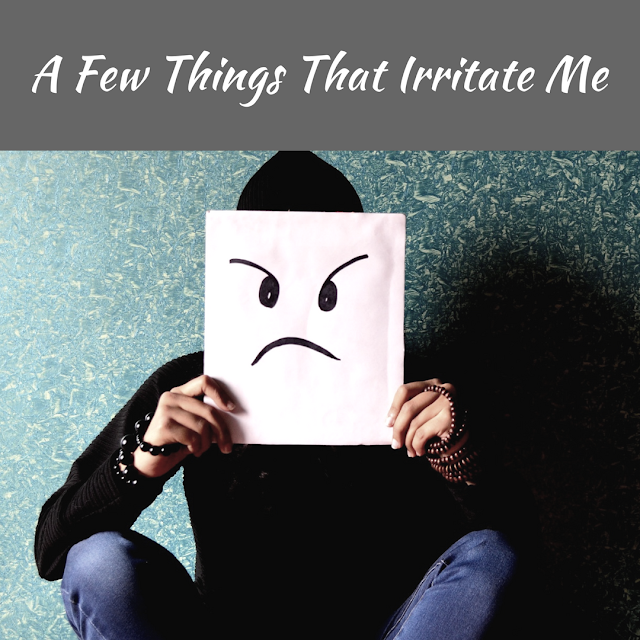 - The fucking potholes all over Omaha.  (They are laughably bad, and I now drive with my entire body rigid and bracing for the inevitable jolt I will feel when I hit them because they're everywhere and cannot be avoided!)

- People who don't use their indicators while changing lanes or turning.

- People who drive too fast or too slow -- if you're paying attention to the flow of traffic, you can easily determine what speed is appropriate for said traffic.

(Clearly I have some road rage issues, but I'm going to be completely honest and say that Omaha has some of the worst roads/drivers I've ever seen.  I don't dislike living here, but this shit prevents it from being a place I love.)

- People who don't know that West Virginia is an actual state and not part of Virginia.  When I say that I am originally from West Virginia, I don't mean western Virginia.  I grew up in a completely different state.  It has been a separate state since 1863.  How do people graduate without learning this in school?

- Forgetting to do something, especially if I realize I've forgotten it when I'm far enough away that I can't justify turning around to take care of it.  (An example might be forgetting to grab library books to return when I'm heading to work.  I'm not going to bother turning around to get them, but it's annoying because I was planning to return them on my way home.)

- Smoking in public places.  I know that it's difficult to quit and everything, but I inevitably get smoke blown into my face and spend the next few hours with itchy, watery eyes and a wheezing cough.  I'm definitely not a fan of that.

- The ridiculous wind we get in Nebraska, especially if I've actually spent time fixing my hair.  That almost never happens, but when it does, I'd like it to look nice for more than five seconds after I step outside.

- Books that really suck and make you wonder how they were ever published.

- Books with spelling and/or grammatical errors.  This probably makes me angrier than it should.

- Ticket scalpers.  If you can't make an event and want to resell your ticket, fine -- but don't try to mark your ticket price up a ton in order to make a ridiculous profit.  And if you're buying up tickets for the sole purpose of reselling them at a much higher price, you're a douche.

- Fruits and vegetables that go bad way too quickly.

- Running out of everything at once.  Why does this always seem to happen (especially with expensive things like makeup)?

- Getting up early.  I am not a morning person.

- People who still, after everything that has happened since he has been elected, support Trump.  I mean, I honestly never could understand Trump supporters, but I really can't understand people who still think he's great.  It's just ... How?  How can anyone support him at this point?

- People who are generally awful.  This is a pretty general statement, so I'll share some that immediately come to mind: racists, homophobes, misogynists, xenophobes, abusers (animals, children, women, etc.), those with no regard for anyone but themselves, etc.

What are some things that irritate you?  They can be big or small things, it doesn't matter -- if it gets under your skin, it counts!
on 3/05/2018
Email ThisBlogThis!Share to TwitterShare to FacebookShare to Pinterest
Labels: general, lists