My Anti-Bucket List: Things I Never Want to Do

But today's post isn't about those things.  Today's post is all about my anti-bucket list.  Whether it's something actually horrible or just something I have no interest in, these are a few of the things I never want to do. 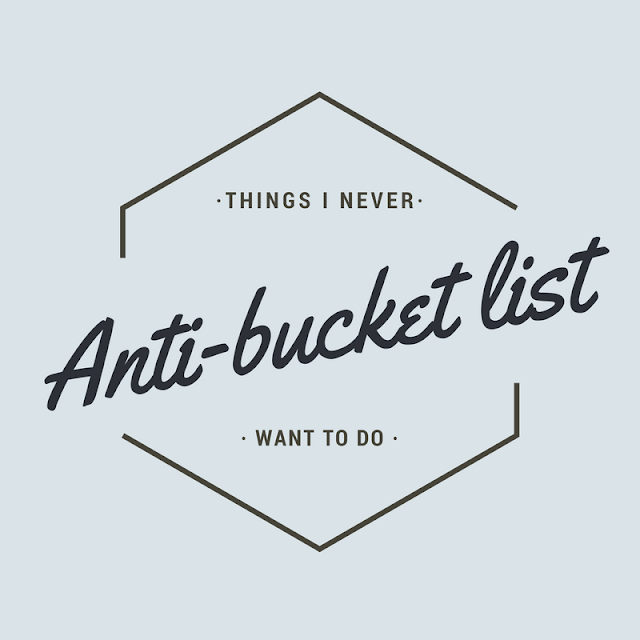 I know I'm probably in the minority when I say this, but I don't like the ocean.  I think it's beautiful to look at, but beach vacations aren't really my thing.  My biggest problem with the ocean (or deep water in general, really) is that I'm terrified of it.  I'm not a strong swimmer, and even though I took swimming classes with some friends a few years ago to try to get over my fear, I'm still not confident enough in my abilities to spend much time in the water.  Surfing seems like the scariest thing I could possibly do in the water, so I obviously have no interest whatsoever in trying it.

I have a lot of respect for people who live and work on farms -- it's really fucking hard work.  And that's exactly why I could never do it.  Getting up early every single day to do hard labor outside and tend to a variety of animals is not something I'd ever want for my life.

I tell myself all the time that I'll "eventually" get around to reading this, but who am I kidding?  I slogged through Anna Karenina for at least six months or more -- I can't even imagine how long it would take me to get through the monster that is War and Peace.

I'm very adventurous when it comes to food, and I love trying new things ... But I draw the line at bugs.  They scare the shit out of me when they're alive, so why would I ever want to put one in my mouth?  I don't care if it's dead -- it's disgusting, and I refuse to try it.

I love yoga.  I practice regularly, and even splurged on a fancy, expensive mat.  (I still consider it a splurge even though I used a gift card to purchase it.)  Hot yoga, however, sounds terrible.  I hate being hot.  I actively avoid going outside during the summer as much as possible because I can't stand the heat.  So why would I ever willingly put myself in a situation where I'm in a super hot room and miserable?  Answer: I wouldn't.

- Go to a country music concert

Apologies to all the country music fans out there, but I've never been a fan of the genre.  I'm not that into a lot of other types of music either (like pop or rap, for example), but I can at least name a handful of artists I enjoy listening to.  I can't do that with country music.  I don't like any of it.  Being forced to listen to nothing but country music for a few hours would be a nightmare for me.

I've been trying to make better, healthier food choices this year, but that doesn't mean I never eat food that isn't healthy.  I like that I can have Dunkin' Donuts or Qdoba or a giant plate of pasta with tons of cheese and garlic butter once in a while and not feel guilty.  If I were on a crazy super strict diet, I would feel guilty as hell (and maybe a little sick as well since my body wouldn't be used to eating that kind of thing).  I really do try not to eat that shit all the time because it's obviously not good for me (and, let's be honest, also because I would definitely not enjoy gaining a ton of weight) ... But I like to have it once in a while, and I'm not going to feel bad about that.

This is something that a lot of people seem to want to do.  (One of my ex-boyfriends actually did this a couple of years ago and loved it.)  It just sounds terrible to me.  I'm not at all an "outdoorsy" kind of person, so this is clearly not something I'd ever consider "fun."  I slept in a tent and didn't shower for four days at Bonnaroo back in 2013 -- I can't even imagine doing that for months at a time (and carrying all my shit on my back all day long as well).  No thanks.

- Stay in a hostel

I love traveling, and I know that hotels can sometimes get really expensive.  Even so, I can't imagine staying in a hostel.  I like to think I could have dealt with it back in my 20s, but let's be real -- I would have hated it.  I like my privacy (especially when it comes to the bathroom), and I get the impression I wouldn't get much of that in a hostel.

When I was much younger, I used to think it would be so much fun to spend New Year's Eve in Times Square.  But, while I still love NYC, I don't have any desire to be completely squished in a giant crowd of people in the cold.  And, to be perfectly honest, I generally have no interest in the musicians performing.  I'd rather spend my New Year's Eve going out for a nice, romantic dinner with Eric and then cuddling up on the couch and drinking more wine.  That's what we've been doing for years, and I don't really want to do anything else.

- Move everything to digital format

I'm obviously a fan of the internet -- I wouldn't bother with a blog if I wasn't.  But while technology is mostly awesome and useful, I would never want to completely give up things like printed books, paper planners, and notebooks and pens.  Sometimes I like turning off/putting aside my gadgets and going offline for a while.  I couldn't do that if I moved everything to digital format.

- Drive across the country

I'd eventually like to visit all fifty states (I've only visited twenty-nine so far), but driving across the country doesn't sound like a fun way to knock a bunch off the "to visit" list.  I like road trips for the most part, but I also like having a very specific final destination.  If I'm not really sure how long it will take to get somewhere (or even where I'm going), I'll get annoyed and anxious.  In theory, a drive across the country sounds incredibly freeing -- in reality, it would probably make me crazy.

I think it's amazing when people are crafty and can create a beautiful home out of a shithole.  Eric and I are not crafty.  If we bought a shithole, it would remain a shithole until we could scrounge up enough money to hire professionals to fix everything.  And, at that rate, we'd probably end up spending so much that we could have just bought a nicer, move-in ready home instead.

I've been living in Nebraska for almost nine years now, and my stomach still drops every time I hear a tornado siren.  (Yes, even during the scheduled testing.)  Natural disasters are scary.  I'll consider myself incredibly lucky if I never experience something like that.

I'd like to think that most people would have this on their anti-bucket list.  I mean, going to jail doesn't exactly sound like a relaxing dream vacation.  I could list a bunch of reasons I'd never want to do this, but I don't think I need to.

Now it's your turn.  What are some things that you'd add to your anti-bucket list?

Also, if you've done any of the things on my list, I'd be interested in hearing about your experience!
on 3/29/2018
Email ThisBlogThis!Share to TwitterShare to FacebookShare to Pinterest
Labels: general, lists