I've been toying with the idea of somehow incorporating a March Madness bracket into a blog post (using books, of course), but I wasn't exactly sure how I'd set it up, choose the "winners," etc.  While looking for inspiration, I stumbled upon this old post by Lauren at Bookmark Lit.  I used her methods as a starting point, asked for advice from Eric (he knows more about sports than anyone else I've ever met), and then went from there.

How I Chose My Initial Matchups:

1.) Only books rated five stars were considered for the bracket.  To keep things simple, I stuck with books read from 2015-2018.  (Basically anything read since I started regularly tracking my reading on Goodreads.)

2.) No rereads were included.

3.) I made an initial list of books that would qualify based on the above conditions, and narrowed it down to a total of thirty-two by omitting any books with questionable five star ratings.  (I never go back and change my ratings, so I primarily relied on my memory and book reviews from my old blog for this.)

I actually only had to eliminate two books, so it wasn't too difficult to make cuts.  (If you're curious, I eliminated Don't Breathe a Word by Jennifer McMahon because I really hated the ending and What She Left Behind by Ellen Marie Wiseman because I think I hastily gave it a five star rating and could never really explain why.)

4.) I cut the list into four sections of eight books each based on when they were read.

5.) I used a random number generator to determine a number between 1 and 8 that would represent each book in each section, then matched up the "seeds" accordingly.

For those who aren't familiar with March Madness brackets, the matchups are as follows:

(And don't feel bad if you didn't know this ... I wouldn't have known it either without Eric's help!)

6.) I then chose a favorite from each matchup until I came up with an overall winner.

(Side note: For the purpose of this bracket, each favorite was chosen based on how much I personally enjoyed reading the book.  Since they all received five star ratings, I obviously loved each of these books ... But I had to come up with a way to start eliminating them.  It was really difficult to choose between some of these books, so in those cases, I just went with the book I felt engaged me the most.)

Here is the result: 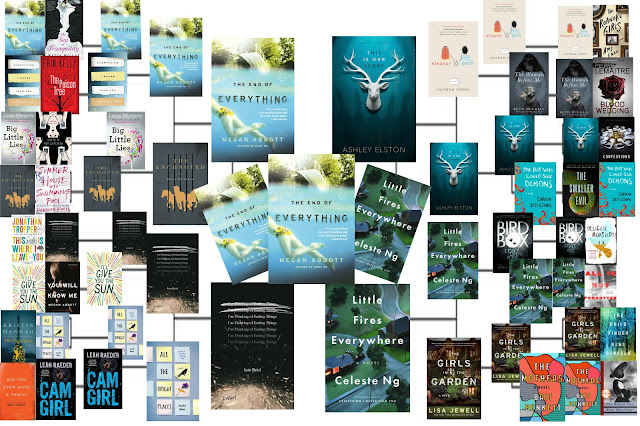 I know the images are kind of small (at least for the first couple of rounds), so here's a list of the initial matchups:

The End of Everything by Megan Abbott vs. The Sea of Tranquility by Katja Millay
Everything I Never Told You by Celeste Ng vs. The Poison Tree by Erin Kelly
Big Little Lies by Liane Moriarty vs. White is for Witching by Helen Oyeyemi
The Enchanted by Rene Denfeld vs. Summer House with Swimming Pool by Herman Koch

This is Where I Leave You by Jonathan Tropper vs. I'm Thinking of Ending Things by Iain Reid
I'll Give You the Sun by Jandy Nelson vs. You Will Know Me by Megan Abbott
The Nightingale by Kristin Hannah vs. All the Bright Places by Jennifer Niven
Did You Ever Have a Family by Bill Clegg vs. Cam Girl by Elliot Wake (published as Leah Raeder)

Eleanor & Park by Rainbow Rowell vs. The Roanoke Girls by Amy Engel
The Woman Before Me by Ruth Dugdall vs. Blood Wedding by Pierre Lemaitre
This Is Our Story by Ashley Elston vs. Confessions by Kanae Minato
The Smaller Evil by Stephanie Kuehn vs. The Boy Who Could See Demons by Carolyn Jess-Cooke

Bird Box by Josh Malerman vs. Delicate Monsters by Stephanie Kuehn
Little Fires Everywhere by Celeste Ng vs. All Is Not Forgotten by Wendy Walker
The Girls in the Garden by Lisa Jewell vs. The Child Finder by Rene Denfeld
The Mothers by Brit Bennett vs. The Bluest Eye by Toni Morrison

- The End of Everything vs. The Sea of Tranquility

These books were very different, but I feel like I rave about them equally.  The End of Everything obviously wins it all in the end, but this was still a really tough choice for me to make.

- The Nightingale vs. All the Bright Places

Both of these books made me sob hysterically, and they're both books I've continued to think about long after I finished reading them.  I connected on a more personal level with All the Bright Places, though, and I chose it for that reason.

- This Is Our Story vs. Confessions

These two books completely sucked me in and held my interest throughout, so it was an almost impossible decision to make.  This Is Our Story had a slight edge, though, because I found it slightly more engrossing.

- The Girls in the Garden vs. The Child Finder

I think The Child Finder was a better book overall, but The Girls in the Garden was a book that I just couldn't put down.  I felt like it deserved to "win" for that reason.

Thoughts on the Final Result:

I wasn't overly shocked that The End of Everything won the whole thing since I loved it so much, but it was still a little surprising.  After all, that was the first book I ever rated on Goodreads -- that means that nothing else I've read in the last three years has been as good.  (At least in my opinion.)

I tried not to overthink my choices, so hopefully this is an accurate representation of my feelings on each of these books.  I also liked that many types of books were represented in the bracket -- sometimes I feel like I just read a ton of thrillers, but this proves that I've had luck finding amazing books in several different genres.  I was also surprised by the number of YA books that were in the initial thirty-two, and even more surprised that several of them made it past multiple rounds.  This Is Our Story even made it to the Final Four!

Finally, if you're interested in doing this yourself, I used this modified bracket I found from a search for "blank March Madness brackets."  I added the images using the "Layer Manager" function on BeFunky.  (It's free to use, if you're not familiar with it.)  You can use my method to choose your initial matchups, or make up your own.  If you decide to do this, I'd love to know!  If you share your post in the comments, I'll definitely check it out!
on 3/19/2018
Email ThisBlogThis!Share to TwitterShare to FacebookShare to Pinterest
Labels: books